Macaffer is one of a string of players to have been recruited by Collingwood from Gippsland Power . Macaffer led the TAC Cup U/18 goalkicking in 2006, and was named at full forward in the Team of the Year. Macaffer has good pace and can push up the ground to play in different positions.

One of the success stories of the 2010 Premiership. In 2013 Nathan Buckley moving Macaffer into the middle as a tagger reinvented him from the defensive forward role and he cemented himself in the strong Collingwood midfield with the likes of Dane Swan, Scott Pendlebury, Dayne Beams, Luke Ball and Steele Sidebottom. Finishing sixth in the Copeland Trophy that year

On 22 August 2016, he announced he would retire at the end of the season, along with 2010 premiership team-mate Alan Toovey. Macaffer was awarded for his consistent season at VFL level with the Joseph Wren Memorial Trophy and for his clubmanship with the Darren Millane Award

In 2017 Brent was playing coach of Kilkunda Bass in the West Gippsland League and was selected in the WGFNC 2017 Senior Football Team of the Year.  Brent Macaffer was also 3rd in the Senior Football League Best&Fairest,

Brent has recently moved to Eltham and saw the Panthers as an ideal fit for himself and family. 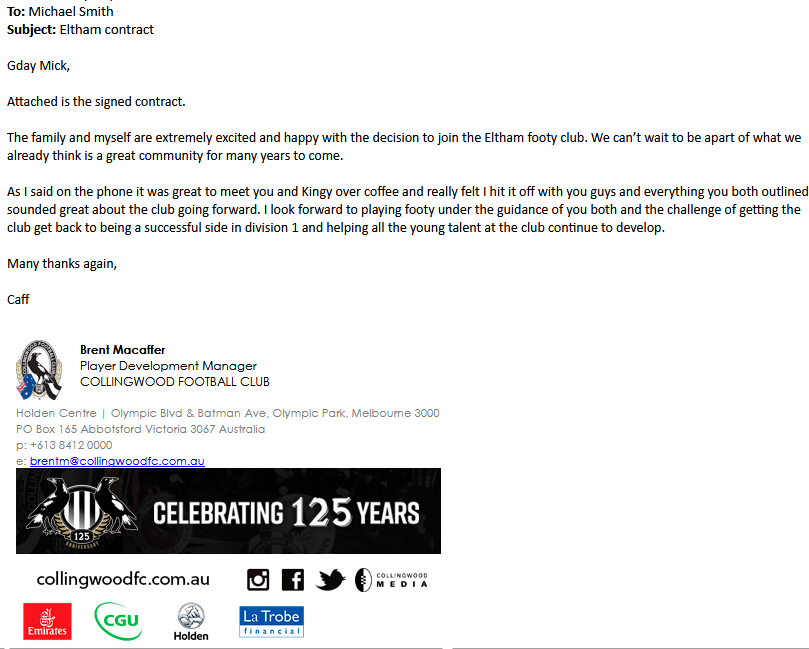