Former Eltham Junior MICHAEL STILL has returned home to the Panthers on a full time basis.

As well as playing, Michael will also be taking on assistant coaching role with the Panthers

Despite failing to play a senior game, he was a welcome addition to West Adelaide in the SANFL, where he played 20 games and kicked 44 goals.

Still returned to Victoria in 2015 signing up Collingwood VFL and was an early-season star in his first year in the Black and White. He kicked 19 goals in eight games, including 12 in three weeks between rounds four and seven.

Injuries kept Still from the field in the back-half of the year, however he returned for a cameo in the VFL in Collingwood’s VFL Elimination Final victory over Werribee.

Injuries restricted Michael again in 2016. playing just two games. One with Collingwood VFL and one with the Panthers against Heidelberg on permit from Collingwood.

In other recruiting news St Mary’s youngster SEAN DESMOND has been approved a move to  Eltham. The 19-year-old kicked 17 goals in 21 senior appearances for the Burra over the past two years. He was a member of the NFL’s under-19 representative win over the MPNFL last year. 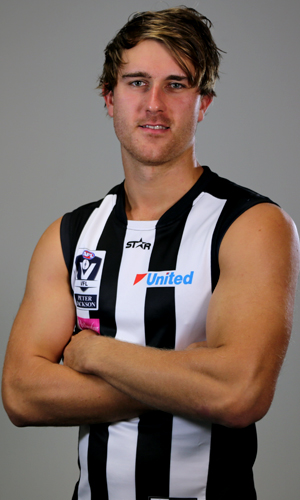