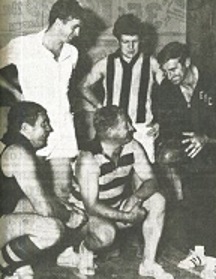 A Recruitment Committee was formed to not only find some quality players but a coach. Alan Harding was heavily involved and committeeman Charlie King put ‘plenty of money’ into the club. Some professionalism had come to the club.
They recruited Hugh Mitchell as coach. 224 games with Essendon, ’62 & ‘65 premiership player, Victorian representative etc etc. With Hugh’s help Eltham recruited Essendon Premiership player and Victorian Rep. Barry Capuano and Ken Davis (brother of Barry). Other players also came onboard such as Bill and Greg Irvine, Brian Pardon and Billy White.

In Round 1 Eltham burnt against Greensborough winning by 117 pts, but it was round 2 that not only was the biggest story in the Diamond Valley, it was a big story in Victorian football.
Keith Burns (Former Collingwood player and later Northern Knights coach) was the playing coach of Diamond Creek. With Eltham in command with 26pts on the board mid way through the 1st qtr, Ruckman Neville Withers was badly injured (never played again) and was assisted from the ground by 2 trainers when Eltham’s 19th man entered the field. Burns called for a count and Eltham’s score was wiped. The Panthers failed to recover. Burns became known thereafter as ‘The Count’,
Channel 7’s ‘World of Sport (a must watch in those days interviewed Mitchell and Burns about the incident and there was many unhappy people around Eltham.

Eltham slipped out of the four when defeated at Templestowe in round 4. After that seven wins on the trot had Eltham up to second. Carlton wingman Cliff Stewart joined the Panthers in round 10 and Eltham were purring!

Round 15 saw the “biggest crowd in the history of DVFL (H&A games)” for the rematch against Diamond Creek. The ground was “filled the ground to capacity”. Cars were parked along Main Road and in side streets. “Central Park was renamed Panther Park for the occasion and was decked out with banners and streamers as though it was the Grand Final”. Diamo gained a 4 goal lead in the second quarter and withstood Eltham to win by the same margin.

4 more wins in as many games saw Eltham consolidate their position in the four, including Eltham’s whipping of North Heidelberg 27.20 (DVFL Annual Report but DV News says 27.23) to 3.4. Ararat youngster David Robinson was proving to be “a valuable acquisition” and was coming good at the right time. Ron Fitzpatrick had joined from Coburg and added to the Panthers wealth of talent.

Finals were guaranteed when Eltham ‘trounced” final 4 challengers Reservoir-Lakeside by 89 pts. The Panthers had thrown out a warning to others sides that it would be a danger on the big Heidelberg ground come finals time. 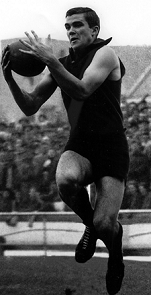 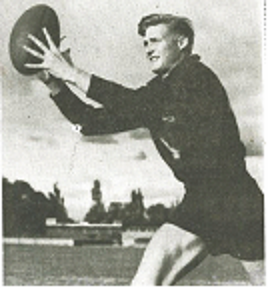 Contribution by Alan Sheehan  – Continued in Part 2 – Later this week